The Man with a Knife, a Holmes and MacTavish crime story © 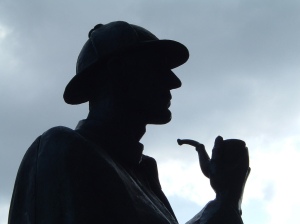 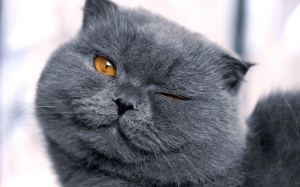 Whoever heard of a cat saving a person from harm? Holmes and I hadn’t either, but two weeks ago that all changed. We had just turned down Baker Street when we heard a woman scream, looked up and saw a man with a knife threatening one of our neighbours. Seeing us, she cast a glance in our direction, causing her attacker to look our way.

“Wait,” he replied. “We dare not move forward, or he will do what he said. If … if there was a way to distract him … then … perhaps.” He shook his head in frustration.

“Could we rush him?”

Holmes looked at me. “Impossible. He is right in her face. One short thrust and she is gone!”

“Give it to me now!” the man shouted, touching the point of his knife to her throat. “Now!”

“But … I don’t have it,” our neighbour pleaded, looking our way.

“Liar! I know better. You’ve got in in your bag. It belongs to me, and I shall have it now!”

“Step with me,” he whispered; “We’ve got to look as if we haven’t moved. Slowly …” and we began moving forward, inch by imperceptible inch, toward where they stood.

“Enough!” He nodded at her handbag, which she held clutched to her breast. “Give it to me! Your bag!”

She shook her head. “I don’t have what you’re talking about. There isn’t anything in my bag but my things. You’re making a dreadful mistake.”

“The dreadful mistake is yours,” her attacker growled, and with his free hand he grabbed at her handbag and yanked, nearly knocking her down. It was then that Holmes and I saw movement in the tree under which our neighbour and her assailant stood.

“Yes?” Inspector Lestrade leaned forward in his chair; “and then what happened?”

“Unbeknownst to either our neighbour or her assailant, MacTavish was up in the tree, looking down. Its lower branches are higher than most of the trees in the neighbourhood.” I looked at the big gray cat lying at Lestrade’s feet. “The assailant was standing right under the branch MacTavish was on. He moved stealthily along the branch until he was right over where he stood. Then, just as he made a slashing movement with the knife …”

“MacTavish dropped straight down, claws and fangs extended, onto his head,” Holmes put in, unable to contain himself. “It was marvelous! I haven’t seen that surprised a look on a person’s face in a long time. All four claws were at his face, neck and scalp, and MacTavish was growling. It was magnificent! The poor wretch dropped his knife and tried to grab MacTavish, who bit him!” Holmes slapped his thigh and laughed. “When Doctor Watson kicked the knife away, MacTavish jumped down and I took charge of our would-be killer.”

“So that where he got all those scratches.” Inspector Lestrade looked down at MacTavish with new appreciation. “You are quite a cat, MacTavish, my boy. The name, Holmes, who gave him that? Did he come with it?”

Holmes pointed to the brown leather collar around MacTavish’s neck. Looking closely, Inspector Lestrade saw the name “MacTavish” inscribed on it. “So he belongs to someone.”

“Yes,” Holmes replied. “He just drops by for a visit every few days.”

“Do you know who his owner is?”

“No,” Holmes replied. “He keeps that a secret.”

Whereupon, Inspector Lestrade maintained, MacTavish looked at him … and winked.

Originally from Seattle, I now live in Sapporo, Japan, where I write, explore this city, read widely, and ask questions about things that i see as important. I'm also an author, with three novels published ("The Old Man and The Monkey", "Grandfather and The Raven", and "Bear: a story about a boy and his unusual dog"). For more information about my writing, drop by my website, at www.geogepolleyauthor.com.
View all posts by gwpj →
This entry was posted in cime, crime, Flash fiction and tagged Cats, crime, fiction, flash fiction, George Polley. Bookmark the permalink.