Adventure of the Feline Assistant, a Holmes and MacTavish mystery tale © 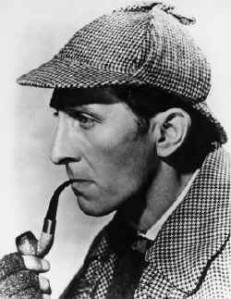 “Shhh,” the figure replied in a nearly inaudible whisper.
Dr. Watson looked about in the half light. The street was empty except for himself, Sherlock Holmes,and a large orange-and-white cat with a round face, huge orange eyes and ears that folded forward, giving it an owlish appearance. The cat sat in the entryway of an apothecary shop across the way, staring at a doorway four or five doors down from where the great detective stood in the doorway of a tobacconist’s shop.

“What are you doing?” Dr. Watson said, whispering in Holmes’ ear.

“Because,” Holmes replied with some exasperation, “He is watching a door. When it opens, he will get up and stretch.”
Watson looked at his friend and raised an eyebrow. What on earth did that mean? They waited. The cat didn’t move a muscle or blink. The street lamps, never very bright, kept the street in darkness except for circles of light beneath each lamp post. Nothing moved for what seemed like half an hour. Then the cat got up, stretched, and yawned. A moment later, when two figures stepped out of the doorway, the cat meowed.

The couple turned down the street, striding rapidly away from where Holmes and Dr. Watson stood. Motioning to his companion, Holmes stepped out onto the sidewalk after them, followed by Dr. Watson and the cat. Three blocks latter, Sir John and Priscilla McDill stopped under a street lamp. Sir John consulted his pocket watch. Holmes and Watson stepped into a doorway.

“Almost time,” Sir John said to his companion. “He should be here at any moment.”

“Mmmm,” his companion replied. “I see we’ve picked up some company, Sir John. It’s that cat. He’s sitting halfway down the block, washing his face.”

“He looks a bit well-fed for a stray, don’t you think?”

Her companion shrugged and consulted his watch again. “Just about . . . ah! Here he comes.”

“Romanian Ambassador,” Holmes whispered as a carriage appeared and stopped. The door opened and a gaunt, gray-haired, moustachioed face appeared. “As thought. Good! Glad you’re here, Watson, as you can confirm the description of that man.”

“What could Sir John want with the Romanian Ambassador?” Dr. Watson whispered.

“Secrets,” Sherlock Holmes replied. “I’ve been following the two of them for weeks. This is the first time I’ve seen them meet with Ambassador Tanasescu. As you know, my good Watson, Sir John has some very close connections in the Gladstone government. The Romanians are after our military secrets. Sir John Neverbody is their link.”

“Sir John? What on earth would turn Sir John Neverbody to spying?”

“Money, by dear Watson. For his lady. Notice the envelope he gave Ambassador Tanasescu. Look,” he said, pointing; “The Ambassador just gave an envelope to him. In it will be quite a sum of money.”

“I see,” replied Dr. Watson in a perplexed tone of voice, shaking his head.

Bowing to the figure in the carriage, Sir John Neverbody slipped the envelope into an inside pocked of his overcoat, doffed his hat and said something to the Romanian, who closed the carriage door. As the carriage pulled away, the couple watched after it as it disappeared in a rumble of horse’s hooves and steel wheel rims on cobblestones. Then, arms around each other, they turned and disappeared in the opposite direction.

Dr. Watson looked at his friend. ‘Who is Priscilla McDill?”

“Sir John’s lover,” Holmes replied with a cynical smirk. “She enjoys being kept in regal style, like one of Louis XIV’s courtesans.
The Romanian’s money helps.” The great detective bent down and scratched the cat’s ears. “Sad, isn’t it my dear Watson, how the mighty are brought down by lust and greed, neither of which appeal to me.” He turned his attention to the loudly purring cat. “Thank you, MacTavish. Once again you have provided excellent service.”

“My dear Holmes,” said Dr. Watson, “when did you begin using a cat as an assistant?”

“Quite recently, Watson,” replied the great detective. “He is reliable and he never errs.”

“A cat?” Dr. Watson raised an eyebrow. One just never knew what his brilliant but eccentric friend would come up with . . . but a cat? That was quite odd.

Originally from Seattle, I now live in Sapporo, Japan, where I write, explore this city, read widely, and ask questions about things that i see as important. I'm also an author, with three novels published ("The Old Man and The Monkey", "Grandfather and The Raven", and "Bear: a story about a boy and his unusual dog"). For more information about my writing, drop by my website, at www.geogepolleyauthor.com.
View all posts by gwpj →
This entry was posted in Fiction, Mystery and tagged fiction, George Polley, Mystery, Sherlock Holmes. Bookmark the permalink.